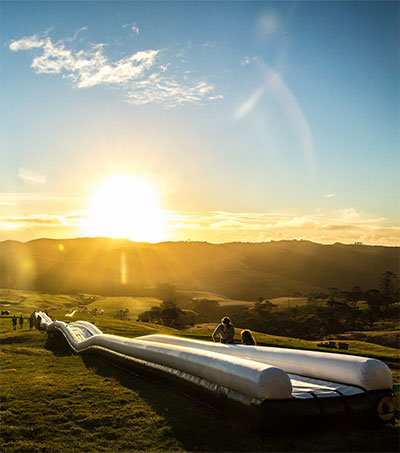 The World’s Longest Waterslide, designed by New Zealander Jimi Hunt, is to be rebuilt in the United States on the slopes of Mountain Creek in Vernon, New Jersey.

After learning from Travel Channel producers about the 2000-foot inflatable waterslide crafted by Hunt, president of Mountain Creek/Action Park Bill Benneyan immediately exclaimed, “We gotta have this.”

After a few phone calls with Hunt, Benneyan pulled the trigger on sending the massive waterslide on a voyage from New Zealand to the United States without knowing if his vision would work out or not. Hunt had no prior experience working with waterslides before envisioning the world’s longest one, but Benneyan knew Hunt’s creation fit in perfectly with Action Park’s history of engineering backyard-style attractions for public thrills.

“This waterslide screams ‘Action Park’ and we knew our resort would be the perfect home for it,” Benneyan said. “What’s more wild and crazy than flying nearly half a mile down a ski mountain on the world’s longest waterslide?”

Hunt is the co-founder of Live More Awesome, “a small charity trying to do really big things for mental health in New Zealand.” He is the author of A Bit Mental.