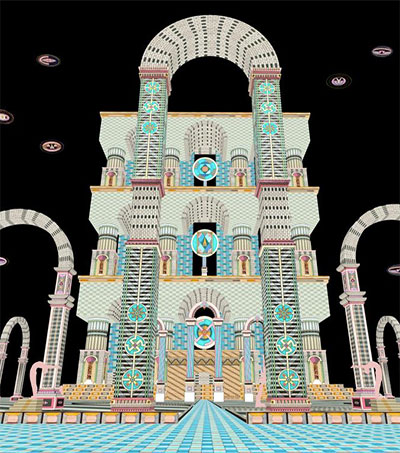 New Zealand-born artist Jess Johnson’s new exhibition, on at the National Gallery of Victoria (NGV), is arresting – a series of geometrical, pastel-toned psychedelic prints that bring to mind fantastical worlds and video games. But experiencing them in a virtual reality format is another thing entirely, Annabel Ross reports for the Sydney Morning Herald.

The latest Oculus Rift virtual gaming technology – not yet available in the commercial sector – has been harnessed to create Ixian Gate, a three-dimensional world Johnson has developed with the help of animator Simon Ward.

“I create the building blocks and hand it to him [Simon] and he constructs it and navigates his way through it,” Johnson said.

The resulting game, the centrepiece of the Wurm Haus exhibition, is immersive in the fullest sense of the word – visitors don eyewear and headphones and find themselves at the top of the altar to Ixian Gate, from where they descend into a futuristic dystopia populated by worm-like creatures and near-naked humanoids in yogic positions.

“It’s quite memorable, that first experience of it,” she said.

It’s this visceral, next-level experience that Johnson wants to engender with her work, first achieved by turning her drawings into light installations, and now 3D animated video.

In January Johnson, who has exhibited previously at the NGV as well as at Sydney’s Museum of Contemporary Art and London’s Tate Modern, will head to New York to take up the Australia Council’s three-month residency at Greene Street Studio. In 2008 she co-founded Hell Gallery, which she ran out of her Richmond warehouse until 2011.

Johnson’s Wurm Haus is at NGV International until 31 January.