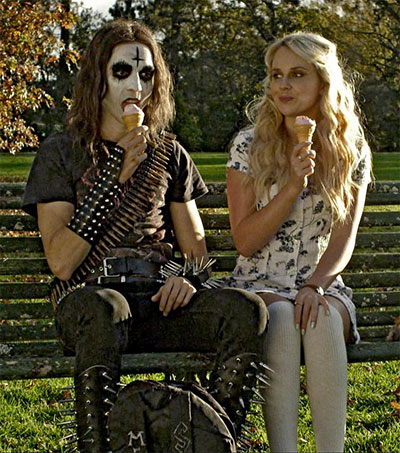 Since Mario Bava’s 1963 film Black Sabbath inspired the Brummie band, metalheads and moviemakers have shared a deal with the devil. The Guardian summons the filthy lyrics, moral panics and nostalgia of a genre that won’t die and talks to New Zealand-born Jason Lei Howden, the man behind 2015’s FrightFest smash Deathgasm.

Filmmakers are turning to metal’s past for inspiration, instead of its present: the studded belts, pentagrams and screaming guitars that are now merely nostalgic rather than parent-bothering.

One contemporary director whose love of all things heavy naturally seeps into their work is Howden.

Deathgasm is a gonzo throwback to that brief 80s boom, in which a pair of headbanging teens accidentally invoke a demon through the playing of an ancient heavy metal hymn.

“It was made as a love letter to my teenage years, loosely based on my own experiences moving to a small town where people who stood out or looked different were ostracised and teased,” he explains.

“I was tired of metalheads always being depicted as the bullies or villains in films and TV. It’s a lazy convention that still persists. Even the bullies from the new It movie were wearing metal Ts and pounding Anthrax. It doesn’t reflect the reality that metal appeals to an intelligent and diverse range of people. I know accountants, police officers, firefighters, doctors and truck drivers who enjoy banging their heads to heavy music in their spare time. I wanted a movie where the metalheads were the heroes.”

Howden also worked as a VFX artist and a variety of projects with Peter Jackson’s Weta Digital on films including The Avengers, Prometheus, The Hobbit trilogy, The Great Gatsby, Wolverine and War of the Planet of the Apes.

“Between the collapse of newspapers, the misfortunes of digital media, and the economic wreckage of the coronavirus pandemic, writing for a living can feel like a cold, dreary, morale-sucking march to…