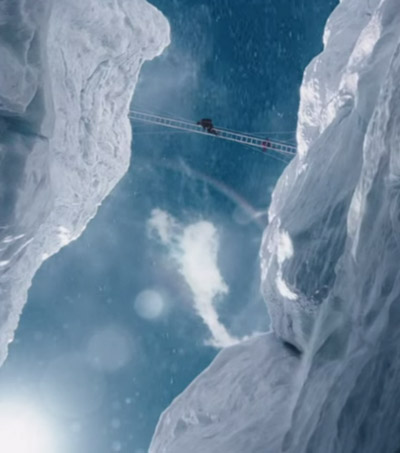 “Stuck atop the highest peak in the world, nobody can hear you scream. That’s what makes this white-knuckler, about an ill-fated ascent to Mount Everest, such a harrowing and haunting force of nature”, writes Mara Reinstein for US Magazine.

In her review Reinstein gives Everest, which is based on the 1996 Everest disaster 3.5 stars out of 4.

In the movie experienced guide Rob Hall (Jason Clarke) leads a group of hikers up to Mount Everest. Played by Josh Brolin, John Hawkes and Michael Kelly these are ordinary people, which is one reason why the movie is so compelling. American Scott Fischer (Jake Gyllenhaal) also wants to guide clients on to the mountain.

“The problem is that these dream-chasers don’t seem to realize that Everest’s summit isn’t a finish line —it’s a halfway point. And they learn that lesson in the cruelest way possible,” writes Reinstein.

When the storm hits the climbers the “problem-plagued descent turns into a fatal one.” Eight people lose their lives in the descent.

“After your heart jumps out of your chest, it will break in two as a stranded Hall, still on Everest, speaks lovingly to his pregnant wife (Keira Knightley) on a satellite phone.”

Director Baltasar Kormakur “helms the chaos in the mountains with dizzying award-worthy authenticity.”