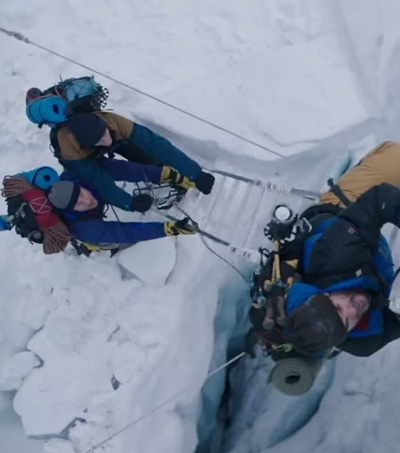 “Everest, a new movie about the two rival missions up the mountain in 1996, has been chosen as the opening night film of this year’s Venice film festival – a spot which has recently proved itself a premier launchpad for Oscar contenders”, writes Catherine Shoard for The Guardian.

“Everest is inspired by true events in 1996, when two different climbing expeditions were faced with an epic struggle for survival in their attempt to reach the summit of the world’s highest mountain”, as reported in The Hollywood Reporter.

The movie, shot on location in Nepal, the Italian Alps, the Cinecitta Studios in Rome and Pinewood Studios in the U.K. has been scripted by two veteran British screenwriters: William Nicholson, (Gladiator & Unbroken) and Simon Beaufoy (Slumdog Millionaire & The Full Monty).