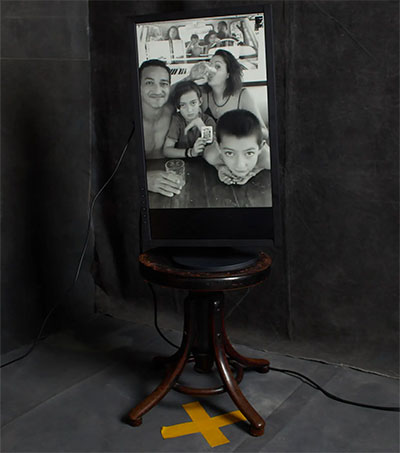 Working from a pop-up studio in the garage of his Sydney home, New Zealand-born photographer Hugh Stewart has captured the experience and emotion of life in lockdown using just FaceTime and a strategically placed computer monitor. Amongst his black-and-white portrait series is a range of notable Australian personalities including actress Nell Campbell and comedian Celeste Barber, Alana Wulff writes for The Sydney Morning Herald.

“There was no great epiphany starting the project, but it has touched a chord with people and has been a great leveller, which is what I think everyone has responded to,” Stewart tells the newspaper.

With his monitor propped on top of a chair (a prize for winning highly commended in the 2020 National Photographic Portrait Prize), Stewart came up with the idea of FaceTime calling his subjects and photographing the scene before him.

Having photographed nearly 200 subjects, the significance of this collective response is not lost on the photographer: “People have been quite raw and vulnerable.”

Original article by Alana Wulff, The Sydney Morning Herald, May 26, 2020.