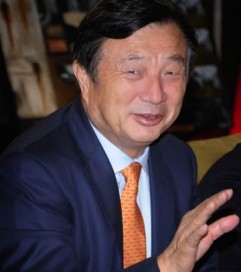 Huawei Technologies Founder Ren Zhengfei chose New Zealand for his first ever media briefing, The Wall Street Journal reports. ‘New Zealand may be a tiny market for most global companies, but for Chinese telecommunications equipment giant Huawei Technologies Co., the small nation apparently takes up a big place in its heart,’ the Wall Street Journal wrote. ‘Until this week, Mr. Ren, 68 years old, had made few public appearances. [His] first media briefing comes at a time when his company is trying to increase transparency after facing challenges in the U.S., where security concerns raised by lawmakers over the Chinese firm’s network equipment have prevented it from doing any meaningful business’, according to the Journal. The Wall Street Journal said that, according to local media, Mr. Ren chose New Zealand because he appreciates the opportunities NZ telecom carriers and the government had given Huawei.’ The Wall Street Journal said that,  ‘New Zealand’s welcoming stance, evident in Huawei’s contract with local carrier Telecom’, was a ‘stark contrast to the tough environment in the U.S.’ Huawei is the world’s second largest telecommunications equipment manufacturer and the third largest manufacturer of smartphones after Apple and Samsung. It turned over US$35 billion last year and employs more than 144,000 staff, between 30,000 and 40,000 of whom are non-Chinese nationals. In New Zealand, Huawei is a major supplier of telecommunications equipment to 2degrees, Vodafone and Chorus. But it has been shut out of the US and Australian markets, allegedly on national security grounds. Mr. Ren said that ‘jealously’ might be the reason for the U.S. disapproval. He also said that Huawei was looking to a more decentralized and customer-focused business model in future. ‘The future model is to give the biggest say to our local teams who are closest to our customers and empower them so they have flexibility in interactions with customers. The headquarters or corporate functions will change into a more supporting and service function. We think that is going to be a very challenging transition and we are prepared to spend the next five to 10 years to complete it,’ Mr. Ren told New Zealand reporters.