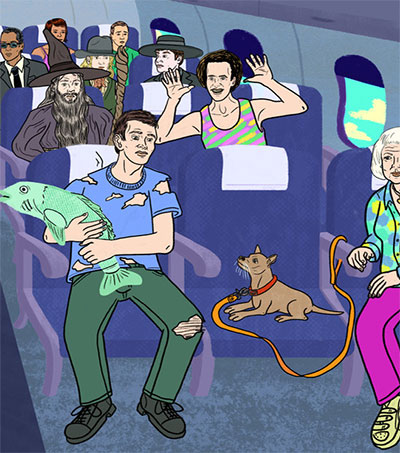 The element of surprise and high play is, at its core, the philosophy behind the airline’s safety videos.

And though competitors like American and Virgin America have drawn attention for their stylish safety videos lately, the New Zealanders more or less invented the genre – and then perfected it.

New Zealand is a country known for coming up with outlandish innovations – this is, after all, the country that invented bungee jumping. Naturally its namesake airline would also take risks. In 2009, the airline embarked on a risqué marketing campaign called “Nothing to Hide,” which featured Air New Zealand passengers and crew wearing only body paint. Among the ideas thrown around for the campaign was a new safety video, where the plane’s various safety features would be told by a body-painted cast.

“Safety videos were something that was totally untouched,” says Jodi Williams, who oversees the videos’ production as the airline’s global brand and content marketing manager. “They were highly regulatory, and people just tuned out because of their dry nature. So we saw a way to be innovative and take that untouched formula, and turn it on its head.”

The result was The Bare Essentials of Safety, a video that did 7 million views in those 2009 days before Snapchat, Instagram, Facebook, or Twitter really had the power to send a silly-serious video by an obscure airline rocketing around the world.

To keep up with different audiences and platforms, each video entails a suite of nearly 30 different pieces: different segments for different aircraft, a YouTube teaser, cuts for Instagram and Snapchat, Asian cuts for WeChat, on and on. The in-flight video is shipped to the Air New Zealand fleet about six weeks before it goes live.

“It’s not about just the safety video anymore,” Williams says. “They’ve become entire marketing campaigns, with different audiences and markets, and you’re constantly looking for ways to evolve and engage.”

In focus groups with New Zealanders, Williams says, they compliment the safety videos for showcasing the country’s personality and its overlooked destinations. And since New Zealanders want the world to love New Zealand as much as they do, the videos also foster a sense of pride.