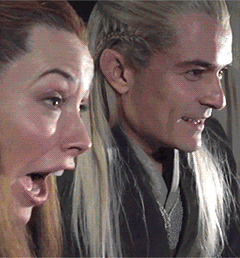 A video of Hobbit fans reacting to the release of a first glimpse into the next Hobbit instalment has received the same treatment, with Peter Jackson release a video with three of the film’s stars reacting to fans video. The trailer for The Hobbit: The Desolation of Smaug, filmed in New Zealand, was released on 12 June. Anticipating their reactions, sister’s Kellie and Alex – who run the YouTube channel Happy Hobbit – decided to record themselves watching the trailer for the first time. What follows is a series of gasps and squeals of delight. Not long after the sisters posted the video on YouTube it caught the eye of Hobbit director, Peter Jackson, who posted the video on his Facebook page along with the comment: “This is pretty cute – a video of two fans watching the live release of our new trailer. Check it out!” Three hours later Jackson posted a second video described as a ‘sequel’ to the original video. Jackson’s two minute clip features the films stars Orlando Bloom, Evangeline Lilly and Lee Pace dressed in character laughing at the girls reactions. “This is more intense than the trailer,” Lilly says at one point. Upon watching Jackson’s video one of the sisters said they felt like they are “living in an alternative reality”. The celebrities’ response saw the sister’s end up in local and international news. The Hobbit: The Desolation of Smaug is due for release worldwide on 13 December.