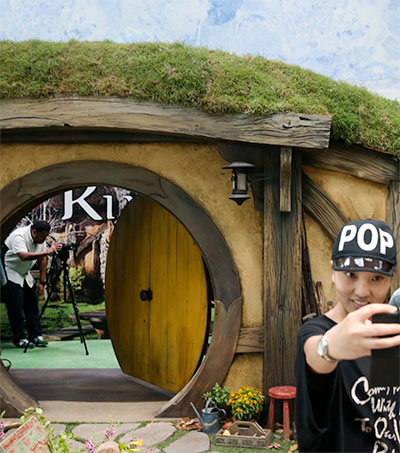 Singapore Hobbit fans are being treated to a life-sized piece of Middle-earth in the departure hall of Changi Airport Terminal Three. As well as a hobbit hole, visitors can see a statue of Gandalf the Grey and a replica of the One Ring – by the same people who created it for the film.

“Hobbiton sits in an idyllic landscape in New Zealand and we hope to give visitors a little taste of what New Zealand has to offer,” owner and general manager of Hobbiton Russell Alexander said. “You can smell the flowers; the props and the timber were all brought in from New Zealand. We have art directors and builders to make sure everything is made to look like our hobbit holes back home. There are 44 hobbit holes in Hobbiton … this travelling one is our 45th.”

It took Alexander’s team two weeks to finish constructing the hobbit hole that measures 10m by 5m. The hobbit hole had previously been in London’s Claridge’s hotel for the premiere of The Hobbit: The Battle Of The Five Armies, the last instalment of the Hobbit movie trilogy.

“We know there is quite a big appetite for New Zealand in Singapore. The last film in the Hobbit trilogy is the highest grossing among the Lord of the Rings and Hobbit series here,” said Jacqui Smith, a representative from Tourism New Zealand. “Singapore is a key market for visitors to New Zealand and this year, we celebrate 50 years of diplomatic relations as well.”

The hobbit hole will be at Changi Airport until 5 April.

Tags: Changi Airport  Hobbiton  Lord of the Rings  Russell Alexander  The Hobbit: The Battle of the Five Armies  Today Online