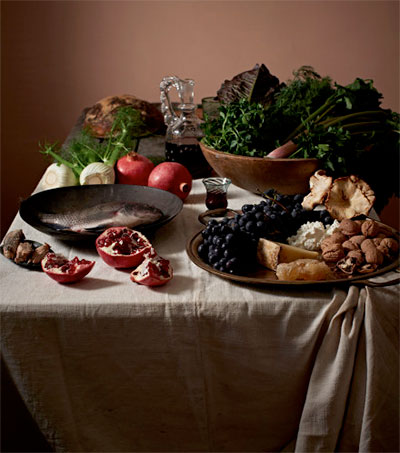 New Zealand-born photographer Henry Hargreaves, 35, who has made a name for himself by using food as a vehicle for the provocative, charming and macabre, has launched a new series showcasing the way in which societies – across time and continents – feed their poor versus their rich.

Power Hungry examines the concept that the measure of a civilisation is how it treats its weakest members: “[Together with food artist Caitlin Levin] we looked at polarising governments throughout time. What began as a story about rich versus poor, became a narrative about the way cultures suppress lower classes though lack of access to good and nutritious food,” Hargreaves says.

In each shot, a wood plank table is divided in two by a tablecloth, delineating the meal for the haves and have-nots. Contemporary North Korea perhaps reveals the most glaring disparity: a giant hunk of Emmental cheese from Switzerland, Kim Jong Un’s notorious favorite, is juxtaposed by a meager bowl of porridge.

Hargreaves was interested in the dictator, who was recently reported to have been suffering from gout, and uses the table to prove a larger point: “The country projects a reluctance to change, yet inside the upper echelons their culinary tastes have already moved beyond the state.”

At the 2013 Venice Biennale, he documented death-row inmates’ final meals graphically styled in his No Seconds series, synthesising elements of the human condition with horrific violence and the mundane.

Hargreaves, a former fashion model, grew up in Christchurch. He lives in New York.