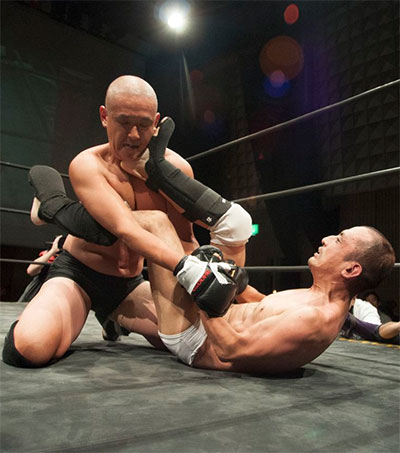 It sounds like amateur wrestling’s ultimate mismatch: an 80kg woman astride a man half her size whose counterattack is utterly futile. But her weight is not her only “advantage” – her opponent, who is also her husband, has cerebral palsy.

In another match, two paraplegic men struggle for supremacy, emerging bloodied after the bell sounds an end to an exchange of head butts.

These are the brutal extremes of Doglegs, a group of Japanese wrestlers attempting to shatter stereotypes of the country’s largely ignored disabled community with every kneebar, headlock and chokeslam into the blood-spattered canvas.

Doglegs premiered to critical acclaim last year at Hot Docs, North America’s biggest documentary festival, and had its US premiere at Fantastic Fest, where Cozens, 42, won best director in the documentary section.

With the film due to be shown at cinemas in several Japanese cities in the coming weeks, he wonders if audiences will react as he did when he witnessed his first Doglegs bout: a compulsion to laugh, followed by shame at his reaction and, eventually, admiration.

“That’s the big question: is it exploitation or empowerment?” Cozens said in a recent interview with the Guardian. “The next question is: who gets to decide? The wrestlers are up there of their own volition, and no one is making any money out of it. They have their own reasons for being there, and you have to give them the benefit of the doubt. If it’s exploitation, then you’re saying that the people in the film are not independent agents. To say that they’re being exploited is condescending.”

Cozens is now based in New York. He lived in Japan for 18 years.