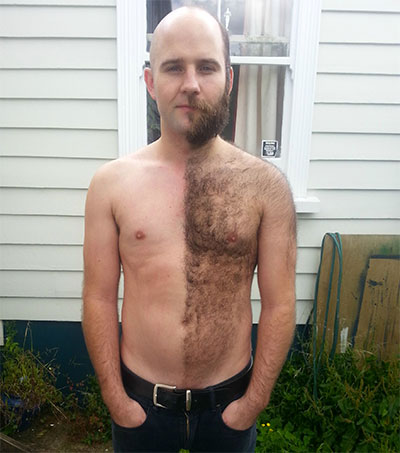 Harley Neville’s Wild Shave Gets Him on Ellen Show

Two years ago, Aucklander Harley Neville shaved off half the hair on his body and photographed the result for his followers on social media. The picture sat on the internet, gestating, clicks multiplying like a bacterial colony – it was also included in Buzzfeed lists. Then this month, the image was picked up by Ellen DeGeneres’ producers.

Neville appeared on the segment “Why I Don’t Have A Husband” where DeGeneres mocks images of men being gross.

“I’m just assuming he lost a bet, that’s what I think,” the host said of the image.

It’s not the most flattering way to find fame, but Neville, a 34-year-old filmmaker, is happy to take it.

“It’s totally not flattering, and as it happens I’m single, so this is the last thing I need. I’m getting kicked while I’m down, by Ellen. But actually no … I just think it’s hilarious in all honesty,” Neville says.

Neville has been making content for various platforms for the past 18 years. He starred in the feature film I Survived A Zombie Holocaust, and is a “pastafarian” or member of the Church of the Flying Spaghetti Monster.

As for all that hair, in the two years since Neville’s fateful shave it has grown back thicker than ever.

“The hair’s grown back twice as thick and it’s everywhere, there’s no point in fighting it, it’s like gorse,” he says.