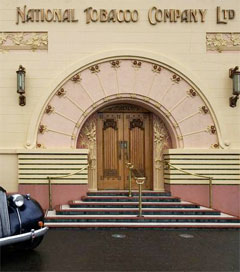 “Nobody was building town centres during the Depression, so Napier is rare,” says Robert McGregor, Independent journalist John Lee’s guide and the author of several books on the city. “South Beach and Napier are certainly the best Deco environments in the world – but ours is the best,” he adds.

A founding member of the city’s Art Deco Trust, McGregor is one of several expert guides offering fascinating strolls around Napier’s architectural treasures.

Graham Holley runs driving tours round Napier’s outskirts. Dressed in vest, Panama hat and immaculate black-and-white spats, his outfit is not the only thing that echoes the 1930s: his touring vehicle is a 1939 royal-blue Packard Six.

As we hop back in the Packard, Holley draws attention to key the architect, Louis Hay. A fan of Frank Lloyd Wright, Hay created some of the city’s finest landmarks, including one fusing Deco and Art Nouveau approaches. Arguably his finest Napier work, the lovely National Tobacco Company Building, was commissioned by cigarette baron Gerhard Husheer.

“It was built for a businessman who wanted everyone to know how rich he was,” Holley says.