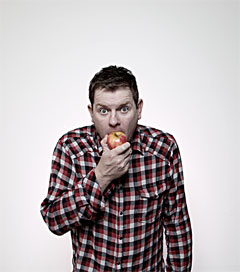 “My comedy is interactive and very immediate – basically, I take several photographs on ‘the way to the show’ and then share them with my audience when I get there,” Pitcher explains.

Pitcher finds that British audiences usually tend to be very responsive and seem to enjoy a self-deprecating style of humour.

“In New Zealand, everyone is super-positive but in the UK I’ll ask what is it like living here and they will answer ‘It’s awful’ but they are humorous with it.”