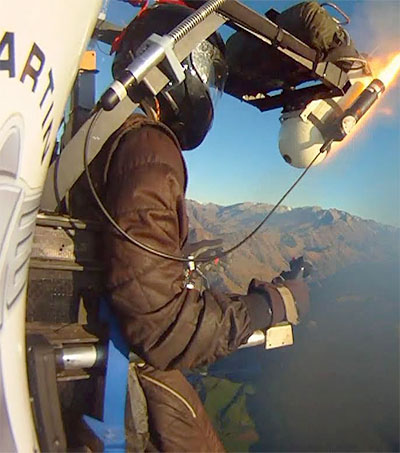 In 1981, a young aviation-obsessed university student, New Zealander Glenn Martin, began working on his dream to invent the world’s first commercial jetpack, the Sydney Morning Herald reports. In late February the company he founded, Martin Aircraft, was valued at more than A$100 million when it listed on the Australian Securities Exchange, after securing a cornerstone investment worth up to A$50 million from Chinese aerospace group Kuang-Chi Science.

“I always knew it would be a long road to develop a wearable jetpack. The United States military had thrown lots of cash at big companies in the 1950s and 1960s that failed to come up with anything practical, and here I was just a Kiwi bloke in a garage with a hobby,” Martin, a biochemist by trade, said.

The Martin Jetpack runs on a V4 200 horsepower petrol engine that drives two ducted fans. It is able to fly for over 30 minutes at speeds up to 74km/h and altitudes of up to 1000m, carrying a commercial payload of up to 120kg.

First deliveries are now scheduled for the second-half of 2016, with basic versions set to retail from $US200,000. Customised versions for military or emergency services clients will carry a higher price tag.

Martin said he was “delighted” with the result that saw shares belonging to a handful of family and friends, who were early backers, valued at between 10 to 20 times their original investment.

Hong Kong-based investors, aerospace group Kuang-Chi Science have also committed to bring their total investment of A$21 million up to between A$44 million and A$50 million over the next 2½ years, through a mixture of equity and debt.