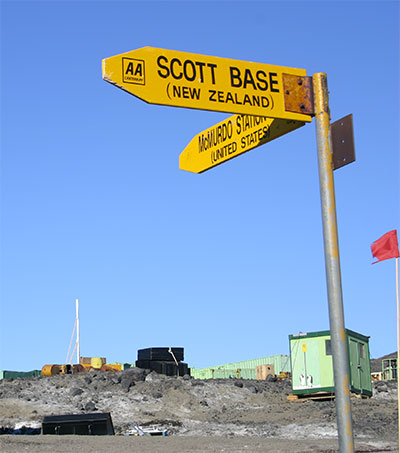 New Zealand is increasingly mobilising resources to secure a share of Antarctica. Current-affairs magazine for the Asia-Pacific, The Diplomat investigates.

“When New Zealand’s Defence Minister Ron Mark presented the new 2018 Strategic Defence Policy Statement at Victoria University on 6 July, he went off his prepared speech at one point and stressed the following: ‘It is often not known that our Defence Force’s biggest deployment is to Antarctica, consisting of up to 220 personnel and different airlift platforms. And it is not even an operation, but a science project.’

“A look in the Policy Statement itself, which was signed off by all government ministries of the coalition government between Labour and New Zealand First, makes clear that New Zealand’s Antarctic presence is – today more than ever – not just ‘a science project’,” Patrick Flamm writes for the magazine. “Science in Antarctica has always been political, and what was true during the last International Polar Year 2008 still holds true 10 years later: ‘Geopolitics has never gone away in Antarctica, and science has been a part of this.’ In this context, the Policy Statement is a clear act of Antarctic securitisation, understood as ‘the manner in which invocations of danger, threat, and risk are used to appeal to the need for political and financial resources.’

“In the sections on Antarctica in the 2018 Strategic Defence Policy Statement, emphasis is laid on the challenges to the region and the responsibility New Zealand has for the ‘stability’ of the Antarctic continent and the Southern Ocean. These responsibilities include Search and Rescue (SAR) operations in the Ross Sea and the monitoring and control of the Antarctic fishing industry. Explicitly mentioned are the New Zealand Defence Force’s responsibilities for the world’s largest marine protected area (MPA) in the Ross Sea, which came into effect in December 2017 and was successfully established after a joint New Zealand-United States proposal within the Commission for the Conservation of Marine Living Resources (CCAMLR) of the Antarctic Treaty System.

“New Zealand has strong scientific, economic, political and strategic interests in Antarctica and is increasingly mobilising resources to securitise and advertise a share of the Southern continent as ‘theirs’.”