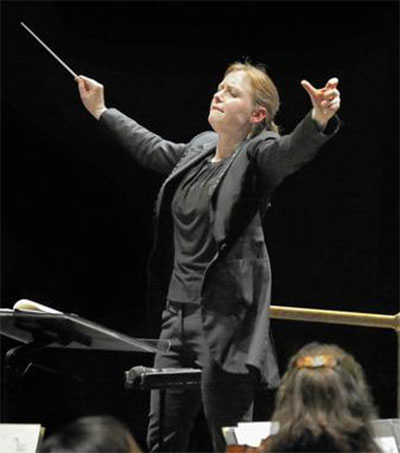 A Gemma New Deal Might Be Hard to Pass Up

“The orchestra scene in Southern California is keen for refreshment,” according to classical music critic Mark Swed of the Los Angeles Times, who reviews the 29-year-old New Zealand conductor Gemma News’ recent “speed date” with the Long Beach Symphony.

“Last year, New became music director of the Hamilton Philharmonic in Ontario, Canada. She is also assistant conductor of the New Jersey Symphony and heads the Lunar Ensemble, a new music group in Baltimore,” Swed begins.

“There was little question that Long Beach could use a conductor like New. The orchestra is now in its second season since Enrique Arturo Diemecke unexpectedly and unexplainably stepped down after 13 years as music director. It is an orchestra that gives only six classical concerts a season and lacks musical direction. Its home, the Terrace Theater, while in a lively part of town, is too large and acoustically uninviting.

“Without a musical vision, the programming is not on the whole imaginative, but News’ programme was interesting and ambitious. Ensemble work was uneven, but when it was good, it was quite good. For every negative, there was a positive; for every disappointment, something of promise.

“For Mahler’s symphony, I moved from my $85 seat to the $20 ones in the top balcony, which was nearly empty. Audiophiles will spend a small fortune on cables and other things to open up opaque sound in their stereo systems, to give a sense of presence and dimension. At Terrace Theater, you can accomplish the same by spending less money. The Mahler up there did not always sound like music being made in the same room as the audience, but you could hear the details, the balances. There was life to the sound.

“Best of all, there was sonic sunniness. I suspect most of New’s efforts went into the niceties of ensemble rather than interpretation. Still, her way of enthusing was to enforce bracing contrasts and avoid at all costs any hint of Mahlerian schmaltziness.

“Picking a music director after a single date tempts fate, and I could not quite sense the chemistry between conductor and an orchestra, which played dutifully some of the time and enthusiastically here and there. Clearly, Long Beach needs a new symphonic deal, and a New deal might be hard to pass up.”