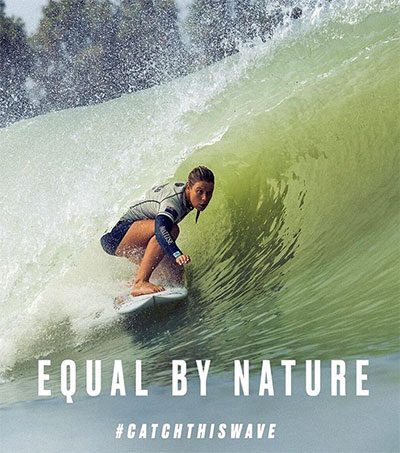 The 28-year-old New Zealander was “sparky” at Kelly Slater’s Surf Ranch, which hosted a recent Championship Tour event for the world’s best male and female professional surfers. Surf Ranch is a US$30m revolutionary “wave system” powered by renewable energy and located in Lemoore, a farming town in California’s central San Joaquin Valley. It has been declared the world’s longest open-barrel artificial wave.

“[Hareb is] one of those instinct surfers who hustles down the line and if there’s a section there she hits it,” Doherty writes.

The World Surf League (WSL) has just announced that from next year men and women will get equal prize money across all elite tour events, becoming the first American-based global sports league to achieve pay parity.

Hareb told TVNZ she was delighted with the news.

“I thought it was going to take a little longer for it to happen,” she said.

“It’s amazing that’s surfing is one of the first sports to do it, it should be like that so the future’s looking bright for us.”

Surfing will be included in the Tokyo 2020 Olympic programme.