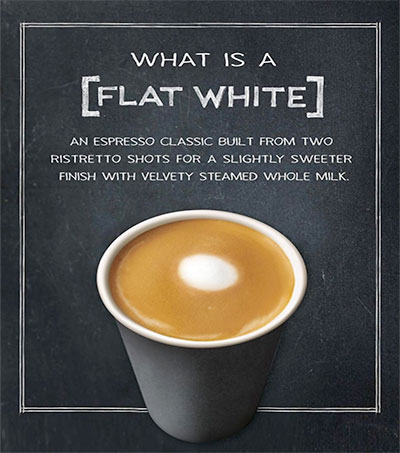 When produced properly the Flat White – now on offer at Starbucks throughout the United States – is made with art and science and dolloped with culture, according to Melburnian CNN contributor Andrew Demaria. “It serves as a societal bond throughout Australia and New Zealand.”

“It simply makes everything better. And when we are out of country, it brings us home,” Demaria writes.

“Like the pavlova or Crowded House, there are arguments as to the origins of this drink. New Zealand or Australia?

“There are various theories but generally it brews down, or up, to this: A Flat White is (usually) served in a smaller ceramic cup and is made up of a double ristretto and lightly textured milk. There’s less foam than a latte and the vessel is usually 200 millilitres. A ristretto is the first part, about half, of an espresso – the more flavoursome bit of the actual coffee.

“When Starbucks announced it would this week introduce the drink in US stores I almost choked on my Espresso Alchemy Flat White.

“Now New Zealand/Australian style coffee offerings are popping up throughout the United States in response to an increasingly sophisticated coffee scene combined with the availability of better roasted coffee beans and the demand of consumers.”