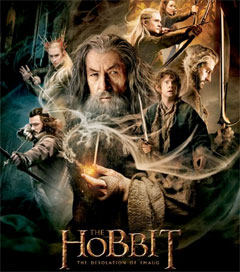 Peter Jackson’s The Hobbit: The Desolation of Smaug recorded the second-highest Boxing Day opening in Australian history taking $AU5.465 million, with the only film topping that, his own. The first film in the trilogy, The Hobbit: An Unexpected Journey, opened with $AU5.9 million last year.

Jackson holds the top five places on the Boxing Day chart, with his three Lord of the Rings films filling out the next three positions.

He has come a long way since his first feature, the ultra-low-budget sci-fi horror comedy Bad Taste. Shot on weekends over four years, with Jackson playing a couple of characters and his close mates the rest, the film cost an estimated $NZ25,000 to shoot (a further $NZ235,000 was stumped up by the New Zealand Film Commission to get it cinema-ready).

By contrast, The Hobbit trilogy is estimated to have so far cost about $AU560 million to make (post-production on the final instalment, The Hobbit: There and Back, is ongoing).