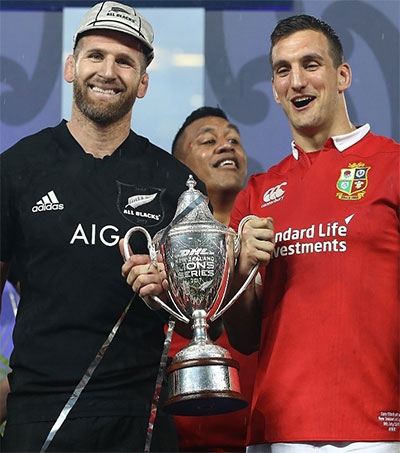 Fans From Both Sides Celebrate All Blacks Lions Draw

A draw. A dead heat. 15-15. And the series too, after the epic twists and turns of the last three weeks, is therefore a tie: one win for New Zealand, one win for the Lions, and Saturday’s stalemate, Eleanor Ainge Roy writes for the Guardian.

In Auckland’s waterfront fan zone, where thousands of supporters of both sides watched the epic showdown on more than a dozen giant screens, people turned to each other, shaking their heads, laughing at the tension they felt mere moments ago, when it seemed life – or death – was on the line.

“It is the best result for everybody, New Zealanders are the nicest people, they keep patting me on the back and saying ‘well done’,” said Julie Kingscott, a Lions supporter who travelled for 17 hours from Bahrain to watch the game. “It’s just a lovely feeling now, it seems to be bringing everyone together.”

All around New Zealand the nation froze as one for 80 minutes. There was reverential silence, as the All Blacks bent into the Haka. There was an uncomfortable murmur, when the Lions briefly pulled ahead. There were hot mince and cheese pies with cold beer at half-time.

It was a sublime distraction from the unrelenting grimness of recent world events. A night when it was acceptable to scream your lungs out and pound your fists in the air. A night with a game that has rules, but remains utterly unpredictable.

“Sport’s not scripted,” All Blacks supporter Brian Crosbie said. “That’s why we call it sport and not a soap opera, you never know what’s going to happen.”

Tags: All Blacks  British and Irish Lions  Guardian (The)