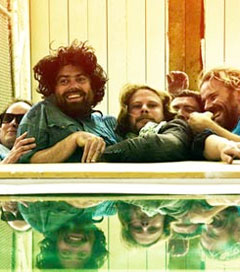 Fandango is Bigger and Bigger Music

Can the Phoenix Foundation’s latest album Fandango match the five stars of their last release, Buffalo, The Guardian asks in their “Album Stream” column. “Five albums into their career, and the Phoenix Foundation – long critical and popular favourites in their native New Zealand – are making bigger and bigger waves away from home. To match their increasing impact, they’re making bigger and bigger music, too: Fandango is an epic of an album that has prompted Samuel F Scott, one of the band’s two frontmen, to describe it as ‘Test match music’.” The Phoenix Foundation formed in Wellington. Fandango is out in the UK on 22 May.