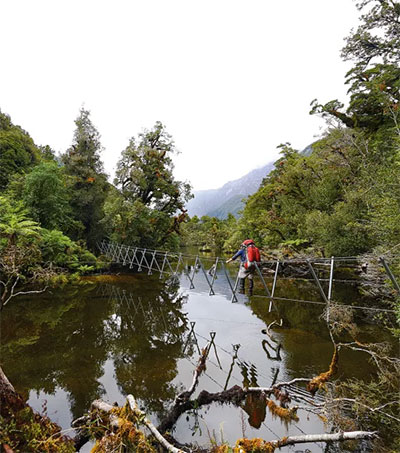 For backpackers who like a challenge as big as the reward, New Zealand’s Dusky Track in Fiordland National Park tests the limits. American author Michael Lanza reports from the bog for Backpacker magazine.

“Swirling wind hurls rain at us, like someone throwing cups of water into our faces. By the time my friend Jeff Wilhelm and I have gone 45m on New Zealand’s Dusky Track, we have both sunk to our knees a dozen or more times into the heaviest, gloppiest, boot-suckingest mud that I have ever mired a leg in,” Lanza writes. “Our first steps in what may be the most dishonestly named mountains in the world – the Pleasant Range in chronically soggy Fiordland National Park – do not bode well.

“Jeff and I have come to backpack a four-day section (about half) of Fiordland’s 84-km Dusky Track, from Lake Roe Hut to the track’s northern terminus at the West Arm of Lake Manapouri. We chose the Dusky for a reason that can seem, at first blush, either a little masochistic or just plain dumb: We’re intrigued by its reputation as the hardest hut-to-hut trek in New Zealand. To us, though, this isn’t about something as shallow as bragging rights. Jeff and I are both past 50; our pride has gone the way of our ability to sleep through the night without getting up to pee. Having done enough stupid-hard treks for several lifetimes, we have nothing to prove.

“We know we can handle the suffering. What captivated us was the Dusky’s more subtle promise: the chance to experience the New Zealand wilderness the way it must have been a generation ago, before the hordes of international trail-trophy seekers invaded. Thanks to its reputation, the Dusky can feel all but deserted compared to other Fiordland trails, like the famed Milford and Kepler Tracks.

“Jeff and I stop for lunch [on the second day] and to gape like happy idiots. My good friend, an English professor and one of the most literate people I know, is reduced to a burbling fountain of vague superlatives by the scenery. And we’re alone, of course. I’ve hiked for three decades all over the US and the world, from Iceland to remotest Patagonia, Nepal to Norway, in the Swiss Alps and Italy’s Dolomites, and twice before here in New Zealand. I’ve never worked so hard for a view – or been so glad I did. It occurs to me that not only am I enjoying this hike, but maybe my satisfaction is just a little bit deeper because of all the trips that came before.

“My advice to anyone heading for the Dusky – at any age – is this: Be patient. You’re sure to discover the rewards out here, but you might not realise it until you’re hip-deep in them.”