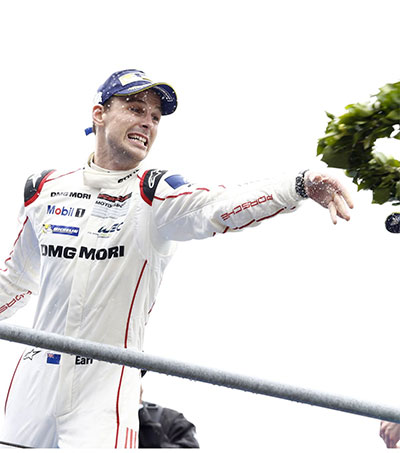 Earl Bamber Driving His Own Way

Earl Bamber grew up on a hunting-safari farm in Jerusalem on the Whanganui River, where he was home-schooled by his mother until he was 8. He liked to entertain himself by driving around the farm with anything that had a steering wheel – sitting on his father’s knees as he drove the family car, then advancing to motorcycles and a go-kart, which he received on his seventh birthday, New York Times correspondent Brad Spurgeon reports.

Little did he know that a family friend who had a farm nearby, Chris Amon, had won the 24 Hours of Le Mans in 1966 driving a Ford, along with another New Zealander, Bruce McLaren.

Now 25, Bamber, who said Amon’s victory was still “a cool thing for Kiwis,” has a growing reputation of his own as a driver.

Last year, in his first participation at Le Mans, Bamber won the race in the highest category, the LMP1, driving a Porsche along with two other rookies, Nico Hülkenberg and Nick Tandy. It was Porsche’s record 17th overall victory at the race, in only the second year of the manufacturer’s return after a 16-year absence from the prototype category.

Extraordinary things tend to happen to Bamber, who has had at once a typical and an atypical career as a racing driver.

But suddenly, in 2011, when he was just 20 years old, he abruptly ended his racing career.

“I stopped because I didn’t have any money,” he said. “I didn’t drive for maybe two years.”

But he was a good speaker, so became a racing car teacher and began working as a commentator for Eurosport television. At a Superleague Formula race that he was covering in Ordos, Inner Mongolia, a driver at one of the teams could not get a visa. So the team asked Bamber to drive – in a car he had never driven before.

“They swapped me as a commentator and got me to race, and then I won,” he said.

“I didn’t have any race gear with me, and I had to borrow other competitors’ stuff, including a helmet,” he added. “Then the next weekend, in Beijing on the street track, we won again.”

“He’s a great guy, very quick, very intelligent, fun and cool,” Hülkenberg, who also races in Formula One, said of Bamber. “I think the three of us and Porsche did an amazing job and that’s why we won.”

With drivers like Mark Webber and the experienced Frenchman Romain Dumas in the other Porsche cars, it was indeed an exploit.