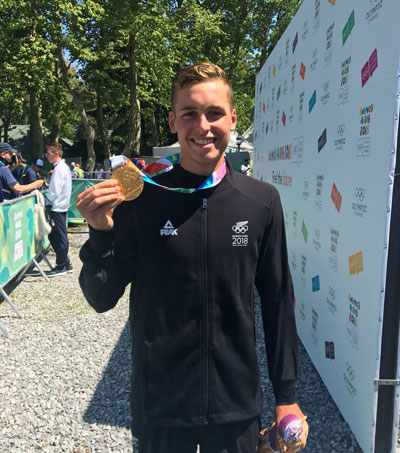 “Dylan McCullough of New Zealand stormed to victory in the men’s triathlon at the Youth Olympic Games Buenos Aires 2018 on Monday 8 October,” as reported on Olympic.org.

“The Kiwi athlete clocked a time of 53 minutes 27 seconds to win by 12 seconds from Portugal’s Alexandre Montez, with Alesso Crociani of Italy a further six seconds back in third.”

“It’s a huge shock,” said McCullough, who could barely stop laughing in disbelief at his achievement. “When I set off I didn’t think I was going to come first. I thought I’d do OK but not win the thing.”

“I’ve worked hard and trained a lot, and finishing school meant that I could focus and finish my training off properly”.

“I didn’t look back the whole run and it was a very special feeling crossing the finish line in first place. I tried to keep calm, but obviously it’s such a big race and I was quite nervous coming into it but I just knew I had to stick to the plan. I stuck to that and executed everything perfectly and then I won.”