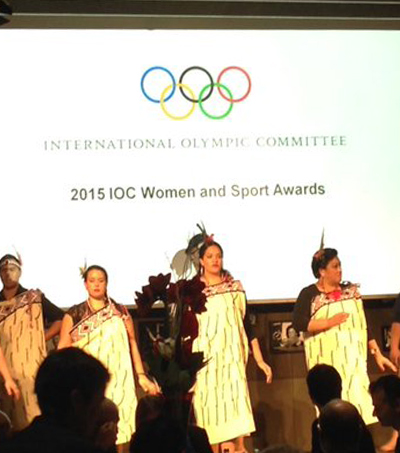 The New Zealand Olympic Committee (NZOC) has been named World Winner at the 2015 IOC Women in Sport Awards ceremony.

They are the first National Olympic Committee (NOC) to be named World Winner and took home the trophy for “its long-standing efforts promoting women in sport”.

“We know that, through sport, women can both build and demonstrate the same qualities that also make great leaders – we have been working hard to strengthen and promote this link,” said Kereyn Smith Secretary General of the NZOC when receiving the trophy at the ceremony at The Olympic Museum in Lausanne, Switzerland.

“The NZOC has long been at the forefront of championing change to ensure that women have a prominent role in sport, on and off the field of play”, as reported in the article on Olympic.org.  These efforts include increasing the number of women representing New Zealand at the Olympic Games as well as leadership positions across organisations around the country.

“Sport is a powerful platform for gender equality to empower women and girls. This is one of the reasons why in Olympic Agenda 2020 we are underscoring the call for stronger gender equality”, said Thomas Bach,  IOC President.

“Gender equality is part of good governance in any organization whether an International Federation, a National Olympic Committee or in the IOC itself.”