NZEDGE  >  News  >  Arts  >  Drilling Down Into Mine Culture With Simon Denny 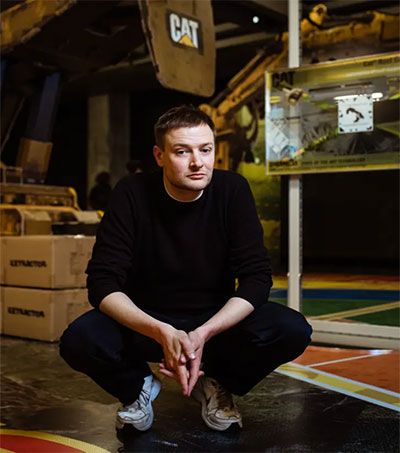 Drilling Down Into Mine Culture With Simon Denny

What does a tiny, nearly extinct bird with a sweet song have to do with the labour practices of a monolithic global corporation? Everything, New Zealand artist Simon Denny tells Stephanie Convery who writes for The Guardian.

The bird and model cage are part of the 37-year-old’s major new exhibition, Mine, which has just opened in Hobart. Enormous in its intellectual scope, Mine is Denny’s attempt to collapse observations about some of the world’s most complex and intricately connected systems – capitalism, colonialism, labour relations, technological development and environmental catastrophe – into something digestible, three-dimensional and immersive.

The bird in the cage is in part a play with the idiom, once a reality, of the canary in the coalmine: the bird as a non-human, uncompensated worker that gives its literal life to its labour. At the same time, the plight of the King Island brown thornbill, due to habitat destruction, is not a metaphor at all. “You have this non-human being who is giving its life to the process of industrial expansion and it’s sending us a very clear message,” Denny tells Guardian Australia.

It’s a metaphor that’s very apropos, especially with the current debate around the Adani Carmichael coalmine in Queensland, the mechanisation of labour and its effect on jobs, and the way that a bird – in that case, the black-throated finch – has become a symbol of political resistance to the rapacious and destructive nature of resource extraction.

Adani was front of Denny’s mind during the development of Mine, but he said he realised along the way that he wasn’t the right person to make a show about that specific issue. He decided to make something broader instead, something that sat adjacent to the Adani issue and allowed people to see themselves and their own roles within the systems that made the mine possible.

Denny cheerfully admits he’s “a very cerebral kind of guy who likes to pack a lot of ideas and information into shows”, but equally important, he says, is sparking an emotional response in his audience – “making moving experiences that tell us something about how we feel and where we are in the world”.

“We are living in and implicated in these different layers of extractive behaviours,” says Denny. “Some of us are the thornbill, who is about to check out of that game, and some of us are far further up, about to harvest the win. But what’s really going on is an organisation of things that doesn’t need to be organised in that way.”

Tags: Guardian (The)  Mine  Simon Denny