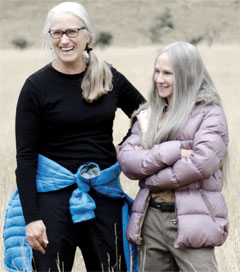 You Don’t Say No to a Director like Campion

The fact that Jane Campion’s drama Top of the Lake has been so well received only makes sense to American actress Holly Hunter, who played feminist seer GJ in the award-winning series.

“It’s been energising to Jane and the form of the miniseries, which really has been revitalised by the artistic success of shows like this,” Hunter said at the recent Screen Actors Guild Awards in Los Angeles.

The gritty drama was filmed for Sundance in New Zealand, and when Campion first called Hunter about playing the role of GJ, Hunter was at first unsure.

When the answer came that she simply had to, Hunter said yes. You don’t say no to a director like Campion, she said.

“I did it because it’s Jane,” she said. “Jane has impeccable instincts and is a true artist, and I haven’t worked with that many of them, so I trust her completely.”

At this year’s SAG Awards, Hunter and Top of the Lake lead actress Elizabeth Moss were nominated for Outstanding Performance by a Female Actor in a Television Movie or Miniseries.