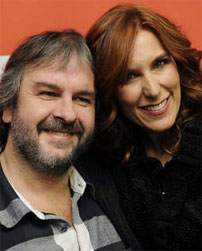 Director Peter Jackson believes former Death Row inmate Damien Echols would be dead now if not for 1996 documentary, Paradise Lost: The Child Murders at Robin Hood Hills, that cast doubt on the man’s guilt in three child murders. And Amy Berg (right), Jackson’s colleague on the Sundance Film Festival premiere West of Memphis, believes Echols and two other men might still be in prison if not for the independent investigation launched by the filmmaker and his wife, Fran Walsh. Jackson, Walsh and Berg say the documentary amounts to the fair trial Echols, Jason Baldwin and Jessie Misskelley — known as the West Memphis Three — never got as Arkansas teenagers when they were convicted in 1994. “We went into this case believing that they didn’t do it, and the facts and the evidence we came out with at the end completely supported that,” Jackson, who produced the documentary, said.