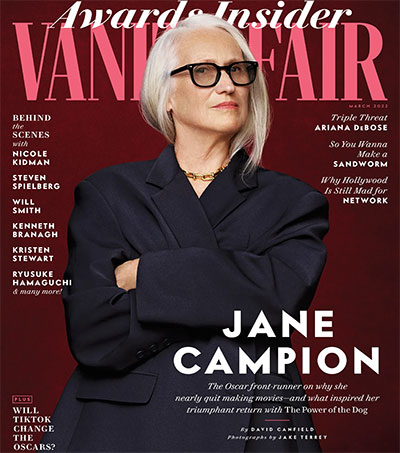 A decade ago, she almost walked away from movies. Now, New Zealander Jane Campion is the only woman ever nominated twice for an Oscar best director thanks to The Power of the Dog. Campion is profiled for a Vanity Fair cover story by staff writer David Canfield.

Backed by an aggressive Netflix campaign, Campion, 67, has flown around the world for screenings, tributes, and celebrations, the kind of treatment reserved for legends of the medium, Canfield writes.

As her friend actor Nicole Kidman puts it to Vanity Fair, this is Campion’s “victory lap”.

Kirsten Dunst, who does deeply affecting work as Rose in The Power of the Dog, had been wanting to work with Campion for more than a decade. The experience did not disappoint. “She knows when she’s got it or not, and you trust her because she’s Jane Campion,” Dunst says. “My goal a lot of times was just to make Jane happy. When I didn’t get a note, I was like, ‘Thank you!’ When you work with someone epic like that, you just want to make them proud.”

Tags: Jane Campion  The Power of the Dog  Vanity Fair