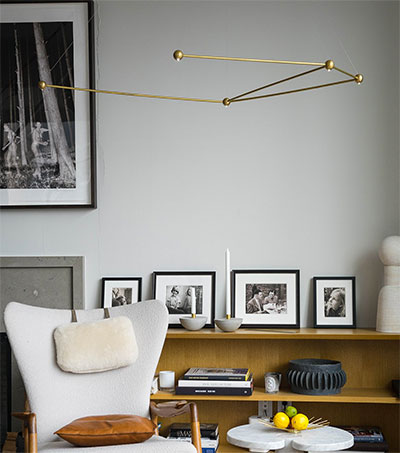 Intrepid visitors to the Architectural Digest Design Show on in New York during March braved lashings of chilly rain to get there. But inside, the elements were the source of inspiration, and included an exhibition from New Zealand-born, Brooklyn-based Richard Clarkson.

The “art and design laboratory” Richard Clarkson Studio made the Sagittarius lighting fixture mounted on the booth’s ceiling. It’s one of the Light System series of brass, LED and mono-filament pendants representing the zodiac constellations.

The sky has frequently been a source of inspiration for Clarkson; he’s got a billowy, cloud-shaped fixture in his lineup as well. He grew up admiring the night sky over Waimarama Beach, and aimed to recapture that magic in the collection. “We’ve all been left awe-inspired by the stars at some point in our lives,” he says.

Another intriguing piece in his booth: a limited-edition wall panel made of glass, aluminum and acrylic on a wood frame. More than 700 tiny lights twinkle behind the laser-etched, back-painted glass face. Clarkson created it to commemorate the night of July 20, 1969, when Neil Armstrong and Buzz Aldrin landed the Eagle lunar module on the moon, and Armstrong took those first steps.

“The Panel is an accurate map of the stars and constellations from New York’s perspective on that very night,” he says.

Award-winning Clarkson is a Masters graduate from the School of Visual Arts in New York and a graduate of Victoria University, where he completed a Bachelor of Design Innovation.