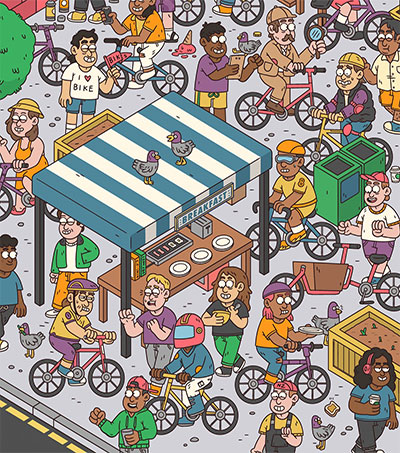 Josh Nelson doesn’t own a car. Because of this, he regularly takes public transport around his home of Auckland, watching locals interact on bus and rail, Giacomo Lee writes for a story published online at UK-based culture magazine, Creative Boom.

“It usually gets me pumped to draw some weird interaction I see, or somehow incorporate it into a larger drawing,” the young creative tells Lee.

The artist’s most recent assignment was working on a poster illustration for the organisation Bike Waikato, which runs events to get people out and on their bike in the region.

Nelson also designed a board game with Game Kings last year called The Girls Just Want To Get Drunk, the visuals in which he had complete creative control over.

“Seeing it all in person at the end of it was so sick: being able to pick it up and actually play the game was really exciting.”