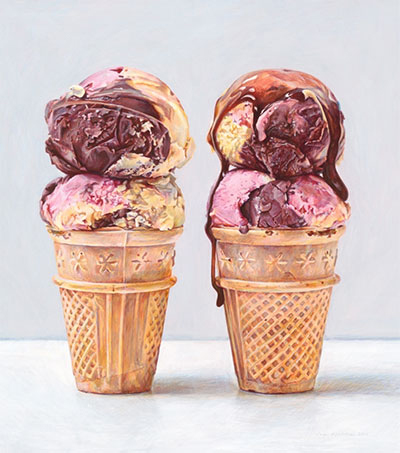 Joël Penkman, a New Zealander based in the UK, is someone who loves to paint as much as she loves to eat, Katy Cowan writes for art and design blog Creative Boom. “So when she considered the subject of her own artworks, she naturally combined the two and began to create simple still-life compositions of some of her favourite snacks and treats.”

“Speaking of her work, [Penkman] said: ‘Food triggers memories and emotion, I like that people can bring something of themselves to the artworks. My favourite medium is egg tempera paint. It is very time consuming as I make the gesso to prepare my boards and grind my own paint to mix, but the results are worth it.’

“Born in 1979, Penkman studied graphic design at Canterbury University’s School of Fine Art before moving to the UK and working as a graphic designer for six years. During her spare time, she taught himself how to paint with egg tempera paint and one of her first masterpieces was a painting of ‘Biscuits in a Line’ – her first food artwork.

“She said: ‘A year or two later, I entered this painting into a local art show. It went down well and from this I was offered an exhibition at a local gallery. So I took a few months off design work to get some paintings together. Not quite sure what to paint, I decided to carry on from the biscuit painting with more food. Afterwards, I put the work online and sent it to some blogs. Thanks to the internet, people from all over the world saw my work and began enquiring about it. Now I’m a painter, not a graphic designer.’”