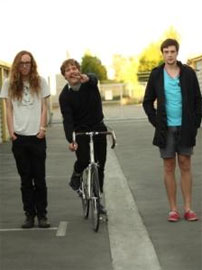 Christchurch three-piece Sleepy Age’s “synth-heavy, European disco-inspired single Décor” has been selected by the Music Alliance Pact (MAP) as one of July’s best tracks from around the globe. “In 29, Sleepy Age began their life as a guitar band, reworking the finer points of Britpop and 9s American indie rock. But in 211, they’ve completely upended their sound releasing Décor. It’s a bold move, and at a time when they would be excused for making gloomy rock music, Sleepy Age has turned misery into delicious synth-pop. The band is currently escaping a string of crippling earthquakes in their home town and touring Europe and the UK.” Each month, the Music Alliance Pact — a group of 32 music blogs from around the world including the Guardian’s — simultaneously post tracks chosen by each blog.