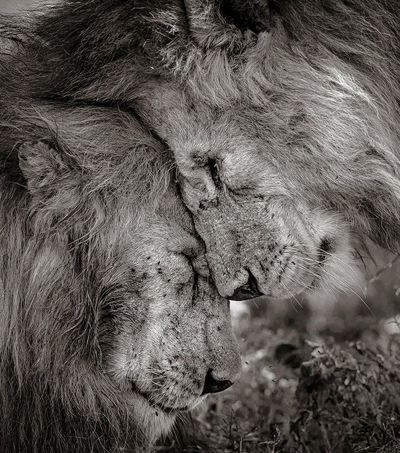 “David Lloyd’s Bond of Brothers, a heartwarming image of an affectionate pair of male lions, has been crowned the winner of the Wildlife Photographer of the Year Lumix people’s choice award.” The Guardian reports.

“These two adult male lions, probably brothers, greeted each other by rubbing faces for 30 seconds before settling down. Most people never have the opportunity to witness such animal sentience, and Lloyd says he was honoured to have experienced and captured such a moment,” according to the article.

“I’m so pleased that this image did well, because it illustrates the emotion and feeling of animals and emphasises that this is not limited to humans. It is something I think more people need to be aware of for the sake of all animals,” said Lloyd.

“The LUMIX People’s Choice Award recognises outstanding entries to Wildlife Photographer of the Year, as voted by the public. The shortlist of 25 images of the natural world was selected by the Museum from over 45,000 entries submitted for the 2018 competition,” as outlined on the Natural History Museum’s website.

David Lloyd is a photographer of wildlife from New Zealand living in London. His winning picture, , among 25 shortlisted for the 2018 competition, can be seen at the Natural History Museum in south-west London until 30 June.”