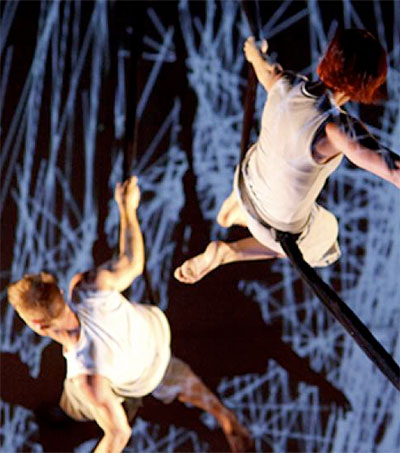 Clarkson says the piece – which combines physical theatre, dance theatre and new technology – started because he wanted to work with his brother, who was a game designer working with the creation of photoreal events in virtual spaces and projections.

“I wanted to make an interactive event in the theatre – as the actors move, the space moves as well,” Clarkson says.

Perspective, he says, was “invented” in the Renaissance as artists discovered different layers of space, a process that continued over time.

The visuals in the show are unique at each performance, he says, because of the way the performers interact with the space and the technology.

Clarkson began studying astrophysics but dropped out to become a performer working in areas such as mime and acrobatics. He didn’t study formally – “I just had a natural physicality” – but says he learned in “the school of hard knocks”.

He founded his first company, Splinter, in 1985 and in 1988 moved to Australia in search of more performing opportunities, He formed Stalker Theatre in 1989 to create a wide range of physical theatre. Encoded premiered in Sydney in 2012 and toured to Korea and The Netherlands in 2013 before a regional Australian tour last year.

Original article by Ron Cerabona, The Canberra Times, May 6, 2015.