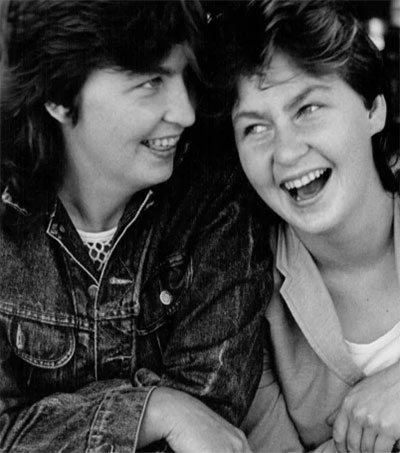 Their career spans 40 years and is emblematic of changing attitudes to gay and lesbian people. New Zealand’s Topp Twins, Jools and Lynda, started their lives in entertainment as “underground performers’ with a unique blend of comedy and politicised country music. The Sydney Morning Herald reports on their “acknowledgement by the establishment”.

In Sydney to host the Strictly Kaftan Party on the roof of the Ivy nightclub on 19 February, the twins have been well and truly recognised in their homeland by the establishment and by “Mr and Mrs Joe Bloggs”.

In October, they were invested as dames by the New Zealand Governor-General Dame Patsy Reddy.

“You have the right to reject a damehood, but we felt it was more important and radical to accept it,” Jools says. The sisters see the title as also honouring others in their community who “stood up and were counted. Changes come from educating people and New Zealand has been very cool about accepting openly gay and lesbian people”.

The Topp Twins grew up on a small dairy farm “out in the wop wops” at Ruawaro in the Waikato. Their “sensational” parents Jean, now 88, and Peter, 90, always maintained that girls could do anything. Never judgmental, they coped when their twins were “plastered all over magazines when it wasn’t cool to be openly gay,” Lynda says. After training in the territorial army, the duo were “hurt and devastated for a couple of days”, when their parents “put the kibosh” on their dream of taking over the family farm. “Mum and Dad saw it as a bit of a prison; they gave us the freedom to do something bigger with our lives.”

While busking in Auckland when they were undergoing “hard times” in the early ‘80s, the Topps were recruited by the Student Arts Council to perform on the university circuit. Their fame was fanned by women-only concerts. “It is interesting that today we have lost a lot of the women-only or lesbian space,” Lynda says. “Events like Pride and the Sydney Gay and Lesbian Mardi Gras are now the only time you have a concentration of gays and lesbians going to theatre, shows, parties.”

“Young lesbians seem so confident now and so together in their ability to stand up and say: I’m lesbian, I’m proud, I can do anything I want. That’s amazing. But there are still things we must be mindful of – many young gays and young lesbians, transgender and gender-fluid people are struggling. With mental health issues, wellbeing and that sort of stuff. It’s not a bed of roses all the time for the gay and lesbian community. Discrimination comes down to education and having an awareness. You cannot judge and you cannot bully anybody … early on we were very aware that if someone was bullied you would stand up for them. It helps if you are a twin because you have always got someone behind you.”

New Zealand has been a receptive audience for the entertainers, whose work has spanned television and film as well as live performances. “We’re funny little political animals,” Jools says. “Everyone has an opinion; we never sit on the fence. I guess in some ways our acknowledgement by the establishment – from underground performers to damehoods – says a lot about this country. We have come a long way.”