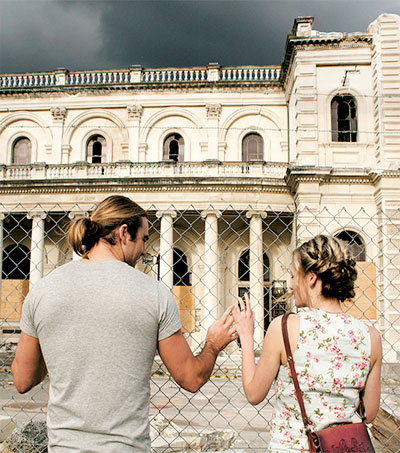 The feature-length Sunday, which has its Australian premiere at the 9th Byron Bay Film Festival, is set in Christchurch a year after the 2011 earthquake, where scenes of damage, poignancy and hope provide a fitting backdrop to a young couple’s turbulent history.

Starring Wellington-born Camille Keenan (Underbelly, Packed to the Rafters) and Australian Dustin Clare (Spartacus, Underbelly), Sunday represents a uniquely personal collaboration for Clare, as his former girlfriend Eve, now pregnant with their child, is played by his real-life partner and mother of their young son, Keenan – an on-screen relationship he says owes much of its power and truthfulness to the history shared by the actors.

Director Michelle Lloyd, also a New Zealander, uses the ruined cathedral and other buildings to mirror the broken but once beautiful relationship both still hold dear. Whether they can resurrect it is the question that keeps the audience in suspense throughout.

Perhaps reasonably claiming ownership of the film, the New Zealand website Stuff.co.nz said it is ‘a wee gem’.

‘It’s our own indigenous Before Sunrise, made with some real craft. This is an honest, heartfelt, skilful, admirable, and truly likeable film.’