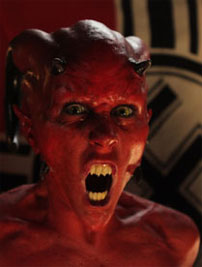 New Zealand director Paul Campion’s debut feature film The Devil’s Rock is reviewed in the Guardian by Michael Hann. “[Campion] attempts to settle the type of question posed by bumptious schoolboys: which would be more evil? A Nazi or a demon? Two New Zealand commandos are sent on a sabotage mission to the Channel Islands on the eve of D-Day. After setting explosives on their target, they ignore the first rule of horror and investigate the screams coming from inside a German blockhouse, where they discover eviscerated corpses, black magic manuals and a sole living Nazi, an SS colonel played by Matthew Sunderland. By keeping the action confined to the tunnels and cells of the blockhouse, Campion creates a claustrophobic setting.” The Devil’s Rock was shot at locations in Island Bay and Wrights Hill in Wellington. Campion was born in the UK. He was a conceptual artist on the first Lord of the Rings film.