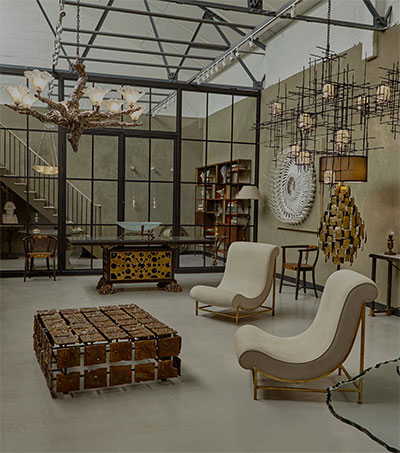 “In an industrial site in north London, behind an anonymous brick façade, lies an awe-inspiring emporium, with bronze foundry and workshop attached. This is the headquarters of Cox London, a husband-and-wife-led team of designer-makers that specialises in one-off and bespoke production of highly wrought sculptural furniture and lighting.” New Zealand-born sculptor Nicola Cox and Christopher, a metalworker and draughtsman, open the door to the Financial Times.

The couple met at Wimbledon School of Art in the mid 1990s. In 2005 they founded Cox London.

“There are certain recurring themes in their work, oak leaves, for example, or the gnarled roots of ancient vines, as seen in the monumental Magma chandelier (£39,600, as pictured), first produced in 2014,” Emma Crichton-Miller writes for the Times supplement How To Spend It.

“Nicola uses the lost-wax casting technique, where the design is made in wax, a material into which intricate details can be carved. Then a mould is made around it and the wax melted out, before the molten bronze is poured in. She uses this pouring process as a metaphor for the life force that twists the roots of vines into eloquent shapes or for the geothermal energy deep inside the earth that sends lava from the mouth of a volcano.

“Most recently, the Coxes have created the limited-edition bronze Moifaa dining table (£91,200), each unique iteration featuring animated, sculpted legs and a spectacular top of pure Thassos white marble with a river of rare Swedish Ringborg green-stone running through it. The inspiration for the table was the apocryphal story of Moifaa, the celebrated racehorse.”

Cox London has won awards for Best Contemporary Design, Best in British Craftsmanship and House & Garden award for the Most Stylish Product at Decorex International.