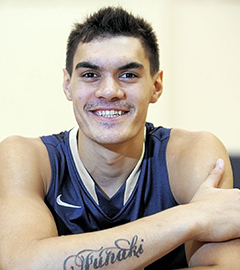 Basketball prodigy Steven Adams is hitting all the right notes in his debut NBL season for the Oklahoma Thunder – including copping a deliberate elbow to the head. Dallas Maverick and eight-time NBL All Star Vince Carter was ejected for his cheap shot on the 20-year-old, seven-foot Kiwi. What excited US critics, though, was Adams’ reaction – he just shrugged it off and nailed the resulting free throws.

Adams’ physical game had clearly riled his more experienced opponent – Adams had clipped Carter’s head with his elbow when wrestling contested ball. That was deemed a technical foul but Carter’s deliberate reaction resulted in his summary dismissal.

Adam’s calm demeanour under fire has further fuelled calls to accelerate the young man’s development by promoting him to the starting five, rather than off the bench.

He produced his best game of his four bench outings to date, scoring six points and nine rebounds in 20 minutes on the court. Starting centre Kendrick Perkins managed only 14 minutes.

Adams is now considered as the player capable of making the Thunder a true title contender. The Oklahoma team is rated among the three favourites in this year’s NBA championship.