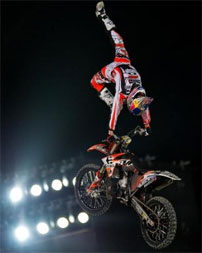 Twenty-year-old freestyle motocross rider Levi Sherwood from Palmerston North has won the 2012 Red Bull X-Fighters series opener in Dubai. He finished Australian Rob Adelberg off with a run featuring a mix of old-school tricks like a turntable, complex combos like a backflip Hart attack one-hander, and stylish, fully-extended holy grabs, recliners and Superman airs. “I was pretty surprised, and Rob rode pretty well,” Sherwood said. “It means a lot. I haven’t really ridden many contests lately and didn’t have much confidence coming into it … it’s a cool little boost.” Surprise finishes are becoming Sherwood’s specialty: He won his first X-Fighters event in Mexico City in 2009 when he was just 17 and won again in Moscow in 2010, the year he also won silver in Moto X Freestyle as an X Games rookie. The Red Bull X-Fighters action picks up again on 12 May at the Glen Helen Raceway in San Bernadino, California.