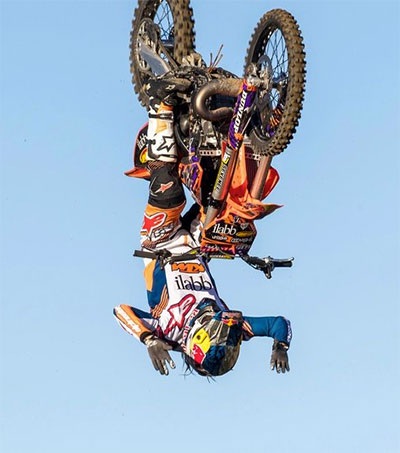 Levi Sherwood Lifts Hands off the Bars and Flips

In a matter of days freestyle motocross star Levi Sherwood has made history twice.

“It’s a big day for me, I’ve landed a trick that no one in the world has ever landed,” Sherwood said.

“Three months ago, I started practicing a double backflip which was really out of my comfort zone, then I got bored with that and I really wanted to push myself to a No Hander Double backflip.

“It took me a while to get both hands to release off the bars, but once they came off it was easy from there.”

Sherwood landed the trick at his Palmerston North compound.

The weekend previous, Sherwood won the FMX competition at Nitro World Games 2017, defending his title with a Double Backflip Nac.

He is now preparing for the Red Bull X-Fighters in Spain on 7 July.