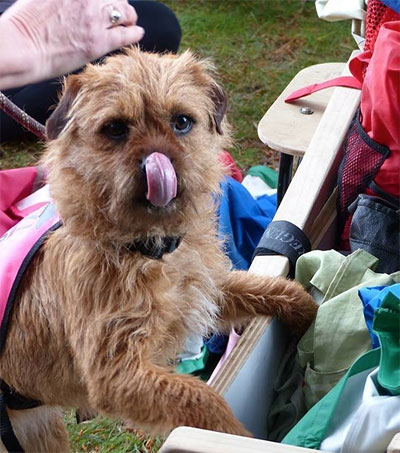 Conservation Dogs on the Pest Warpath

One of New Zealand’s greatest conservation accomplishments, our so-called 100 “island sanctuaries”, are entirely pest- and predator-free, allowing endangered animals to thrive without threat. Conservation dogs like Piri the terrier ratter, a specially trained dog who can sniff out rodents, play a central role in keeping them safe.

Piri’s job is to find rats and mice that might be hiding in luggage or in crevices aboard ships that are heading for islands around Auckland. These islands are home to some of New Zealand’s most threatened and beloved native species.

According to technical advisor with the Department of Conservation Fin Buchanan, the history of conservation dogs in New Zealand stretches back to the 1890s, when a conservation-minded citizen named Richard Henry used dogs to find kiwi and kakapo, and then put these threatened birds on what he thought was a pest-free island.

“Sad to say, the island he chose was within swimming distance of stoats and these birds were killed,” Buchanan said.

Henry is said to have died lonely and disappointed, his island experiment an apparent failure. But today, Henry is remembered as New Zealand’s “first conservation hero,” his methods the cornerstones of the country’s conservation work.

Not only have pest-free islands come to play a central role in the protection of native species, but New Zealand has become a “world leader in island pest eradication,” Buchanan said.

It wasn’t till 1998, when the Department of Conservation established the conservation dogs program, that dogs started to be used more consistently for this purpose. Today, the initiative has more than 60 dogs, Buchanan said.

Some of these dogs are used, like in Piri’s case, to find predators like rodents, cats, ferrets, stoats and even the Argentine ant, an omnivorous, invasive insect. These pest-detection dogs, which are usually terriers (bred for centuries to find and hunt small animals), can either help sniff out predators on the offshore islands themselves or can thoroughly check ships that are sailing out to the islands.

“These dogs, marching around in their vests, very businesslike and all, really capture people’s hearts,” Buchanan said. “They’re the perfect conversation starter.”

Photo by Facebook/Pai and Piri.