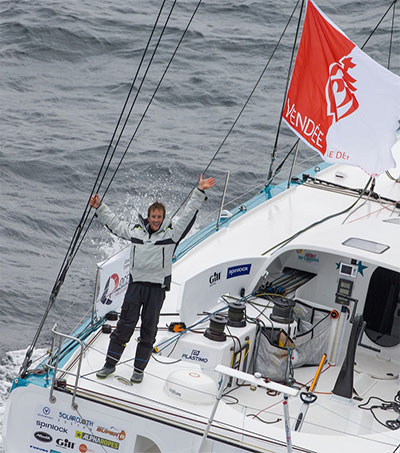 New Zealander Conrad Colman, 33, has written a new chapter in the storied history of the Vendée Globe crossing the finish line of the eighth edition of the non stop solo round the world race under a makeshift jury rig. Colman is also the first New Zealand skipper to finish the race.

After being dismasted late on the evening of 10 February, when he was in tenth place and some 400km west of Lisbon, Portugal, Colman constructed and stepped a remarkable jury rig which has allowed him to sail the final 1190km of the 27,440 nautical miles race which started from Les Sables d’Olonne on 6 November 2016.

Since he was dismasted in what should have been his last big storm of his race, only three and half days from the finish line where he seemed assured of an impressive 10th place, Colman has run out of food and lasted out his final days on the survival rations from inside his life raft. On Wednesday he confirmed by radio that he had only two biscuits left.

Colman, a trained sailmaker and rigger, set one of the most efficient jury rigs seen in the history of ocean racing, working diligently and smartly to the end to improve the sheeting angles and hence efficiency of the rig which is constructed from his boom, part of his mainsail and his storm jib.

Colman achieves his goal of becoming the first ever skipper to race solo non stop around the world completing the Vendée Globe using no fossil fuels, only renewable energies, his electrical power generated by an innovative electric motor, solar and hydro generated electricity and stored in a bank of high tech batteries.

His finish reflects his incredible tenacity, drive and talent, the culmination of a dream which saw him move from the United States to France over 10 years ago to pursue his goal of competing in the legendary solo round the world race.

Colman said: “The VG is more than ever I could have imagined. The conclusion of a voyage that has lasted ten years. So much harder than I had imagined. An incredible opportunity to find the energy within to fight. To face all these challenges that were thrown my way.”

He added: “For a moment, I didn’t think it as going to be possible, when the mast came down. I called the Race Directors, but I didn’t want to ask for assistance. I managed top put one foot in front of another, as I did throughout this race. The person who set out at the start would not have been able to do that.

“I had to find the strength within myself each time. I have changed. That is the case for everyone. I feel nothing can beat me. We’ll be back in four years with my own boat. I’m proud of everything. I’m not ashamed of the dismasting.”