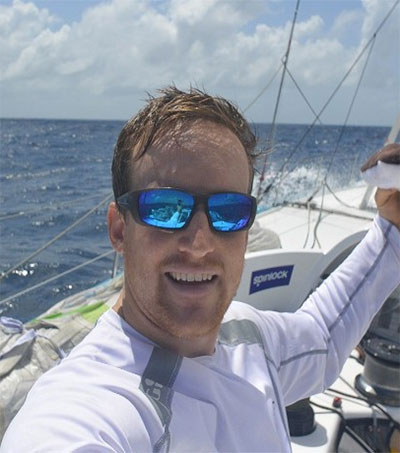 Conrad Colman Solo Around the World in 80 Days

It’s known as the Everest of the Seas, one of the toughest events in any sport. As the only non-stop, round the world solo sailing race, the Vendée Globe is a monumental test of endurance. But for New Zealander Conrad Colman, competing aboard his yacht Foresight Natural Energy, this 45,000-km, 80-day marathon is the biggest buzz sport has to offer.

Colman has been charting his progress since the event began at the start of November, providing photographs of life at deck level along with stunning aerial images taken using a drone.

And although the 32-year-old, who keeps a blog of his experiences, has described the event as “a solitary battle against the elements,” he wouldn’t have it any other way.

“There is no other sporting event in the world that pitches man against the elements, solo and without support, for so long,” Colman writes on his blog.

“The world’s longest sporting event is just a series of little steps, repeated daily until the end. Just like life.”

Colman settled in Lorient, France in 2009 to pursue his dreams of offshore racing. Since then he has raced the Mini Transat, Route du Rhum, won the Global Ocean Race and completed his last round the world race on a 60ft IMOCA in the Barcelona World Race.

He is the co-founder of Pipedream Cycles USA.