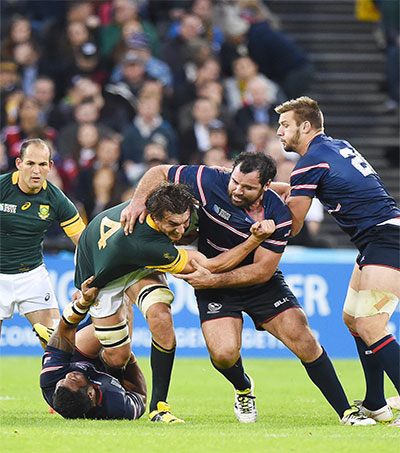 Coloradan Finds Rugby Home Where the Sport Is King

Colorado native Chris Baumann, 29, has racked up plenty of miles over the last few years in his quest to play rugby. Now Baumann (pictured centre, tackling Eben Etzebeth of South Africa, 4) is in New Zealand, playing on his first professional contract outside the United States with the Wellington provincial team in the Mitre 10 Cup competition, which is ranked only behind the All Blacks and Super Rugby.

Baumann, a tighthead prop who has played nine times for the USA Eagles national team, is one of a growing number of Americans who are playing professionally abroad.

Most play for clubs in Europe, though, and it is still a rarity to see an American playing rugby in New Zealand, where it is the national sport. Eric Fry played for Manawatu in 2012, and this year Baumann and New Zealand-born Tony Lamborn are the only Eagles players playing in the Mitre 10 Cup.

“Marty Veale sent some footage, and they said, ‘Yeah, send him over,’’’ Baumann said. “I had nothing to lose because if I didn’t do well, I would just get sent home.”

But after impressing during preseason matches in what was essentially a tryout, Baumann has become a mainstay in the Wellington front row since August, starting every match so far.

Wellington Coach Earl Va’a has liked what Baumann has brought to the team.

“He’s a great character. He works hard. He’s a student of the game and always asking questions and always wants to learn,” Va’a said.

Baumann’s future is also likely to include more Eagles matches in November. The team will play the Maori All Blacks in Chicago, then tests against Romania and Tonga.