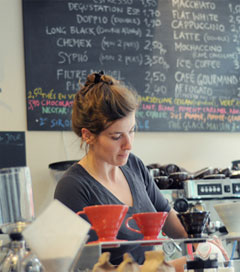 Their 29 square metre hole-in-the-wall is at the foot of the famous silk-weaving district and part of a large Unesco World Heritage site in Lyon, which straddles the Rhone and the Saone and boasts some of Europe’s most beautiful Renaissance architecture.

Cafe Mokxa, which has taken on a cult status in Lyon, and has also become known in Paris and other parts of France, since it opened in April 2011. But success did not come overnight. “It took six months after we opened to establish our clientele,” Morris says. “The French did not understand what we were trying to do. I always joke that we had to train our customers.”

The business now employs seven workers but Morris and Abidi say they have no plans to franchise and are more interested in educating people about coffee. “Instead of opening more cafes, we would like to roast more and keep training people and encourage them to open their own,” Morris says. “We would actually welcome some competition.”