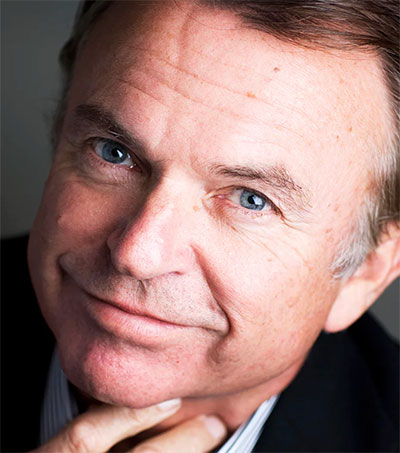 “Performers do best to do their best every time. By no paradox, it is easier to maintain this attitude if you are not being treated as a deity,” Australian broadcaster and critic Clive James writes in a Guardian opinion piece. “Sam Neill, for example, has put together a richly sane career without ever having departed from the human scale, except for the odd stint as an intergalactic grand vizier or something.

“I met him once in Sydney and couldn’t initially believe how non-weird he was compared with the superstar I had interviewed in Hollywood a few days before, who would run towards himself and try to bite his own shoulder. Sam had already made The Dish, so I was able to pay him the biggest compliment you can pay any artist, and tell him, honestly, that my kids had loved it.

“A few days ago, I watched it again, and it’s bliss. Better than that, it makes Australia look like bliss, too. Even around Parkes, where the dish still stands, there are ants and snakes, but there is something the whole world needs going on among the people: a reasonable expectation of each other. The mayor’s teenage daughter has reached the age of seemingly permanent know-all scorn, but the mayor’s wife knows how to straighten her out with no more violence than a sarcastic remark.

“Meanwhile, Sam brilliantly delivers a deliberately non-bravura aria about what he himself has lost. It’s a great performance in a great movie, and a reminder that even the most lordly possessor of a talent must from time to time remember that he or she is a servant. Not even Olivier, arriving on stage to play Hamlet, could ever have imagined that he himself wrote the lines he was about to say. Although the asylums, of course, teem with poor men who imagine exactly that.”

In 2016, Neill, 69, starred in the New Zealand-made film, Hunt for the Wilderpeople, directed by Taika Waititi.